February 29th only comes around every four years so it seemed like a post opportunity not to miss. What does Leap Day have to do with fly fishing? That's up to you. Tie some flies, wet a line, change that old backing, make watery plans or just enjoy this extra day in some fishy manner. If you have a Leap Day story I'd love to hear it. If you have a leap inspired picture email it to me. Here's one of Tim Borski as he leaps into Mexican airspace. 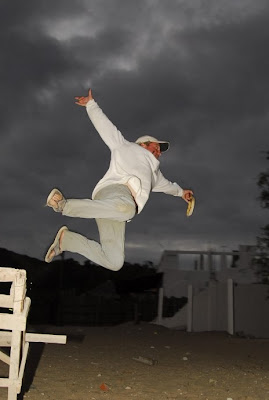 Photo courtesy of Tim Borski
Posted by El Pescador at 9:37 AM 2 comments: 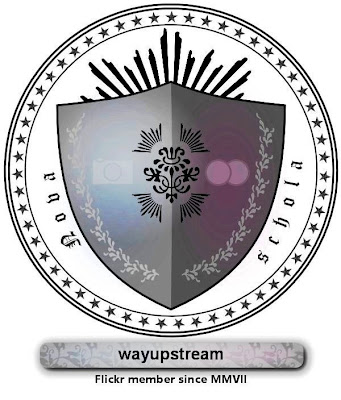 February 28th marks the anniversary of the very first Way Upstream post. I would like to thank everyone who has visited and especially those who have joined conversations and made their voices heard over the past year. I consider Way Upstream to be a group effort and I feel fortunate to have a global community of people involved who are willing to gauge risk, share ideas and to take action. Keep it up. Now that Way Upstream has reached the one year milestone do you think this blog can be officially referred to as "old school"?
Posted by El Pescador at 9:09 AM 8 comments: 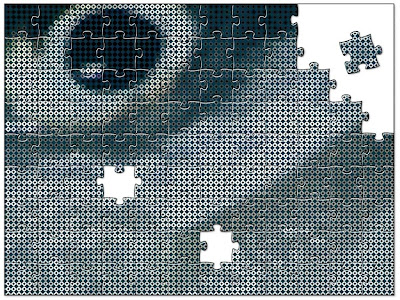 The Atlantic States Marine Fisheries Commission released a peer reviewed stock assessment for striped bass for the fishing year 2006. The bottom line of the assessment was that striped bass are not being over fished, although the spawning stock biomass – the total weight of all spawning age fish – has declined each of the last four years, and fishing mortality is at the “target” fishing mortality rate – the maximum rate at which striped bass should be killed by fishermen. In summary, it was decided that no action needed to be taken on striped bass management this year and that the situation would be reviewed again next year.

This information appears designed to reassure the public that all is well with striped bass, but Stripers Forever believes an in depth review is warranted. Their concerns with the stock assessment center on the fluctuations that these statistics have had over the last five or six years, and what they perceive to be the determination by fishery managers to put a positive spin on striped bass stocks in spite of some serious negative indications. To read the complete article click here.
Illustration by El Pescador
Posted by El Pescador at 4:46 AM 3 comments: 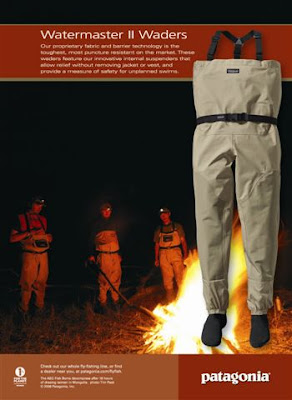 I've heard a lot of dialogue about advertising over the last few months. As is with most things, opinions vary. I don't have a marketing background but I'm starting to develop preferences. I began to wonder what the Way Upstream community thought about this topic. Here's a look at the latest Watermaster II ad soon to run (full page). Sorry about the low res image. The wader copy reads "Our proprietary fabric and barrier technology is the toughest, most puncture resistant on the market. The waders feature our innovative internal suspender system that allows for relief without removing jacket or vest and provides a measure of safety for unplanned swims."

The ad image is a shot from the AEG Mongolian trip. There is a small block of copy (bottom left) that highlights this. It says "The AEG Fish Bums decompress after 16 hours of chasing taimen in Mongolia."

The product shot approach to ads is a bit of a new direction for Patagonia Team Fish. Let me know what you think. I'd be curious to hear any and all thoughts on effective advertising. Are there any memorable ads that stand out for you (any brand)? If there are any marketers out there, feel free to share thoughts on modern day marketing strategies/directions.

Photos by Tim Pask
Posted by El Pescador at 9:50 AM 18 comments: 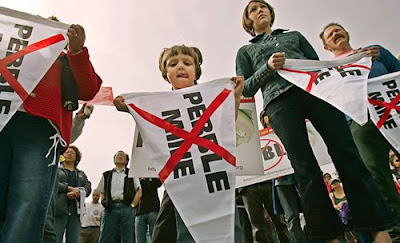 Just in time for Valentine's Day, jewelry retailers are stepping up a campaign that aims to discourage the mining and sale of "dirty gold." A group of jewelry retailers has signed the "Bristol Bay Protection Pledge," which seeks to halt the huge Pebble Mine planned for Alaska's salmon spawning headwaters. Click here to read the LA Times article by staff writer Margot Roosevelt (free registration required). Happy Valentine's Day everyone!

Photo by Luis Sinco/Los Angeles Times
Posted by El Pescador at 10:27 AM No comments: I wanted to post a bit more detail on this new jacket since comments have been generated. Here's copy that Dylan Tomine (pictured right) penned for this style, "Pounding into the teeth of a Nor’Easter or swinging tips through the deluge, the Guidewater Jacket keeps you fishing comfortably long after other anglers have headed for the barn. This jacket combines our best knowledge of fabrics, design and technology to create a full-

Topher Browne (pictured below) has been testing the piece and had this to say about the GWJ, "I tested the new Guidewater Jacket in some particularly nasty conditions during the late Fall in New Brunswick and Nova Scotia (sub-freezing air temperatures, driving rain/snow while standing in a 42-degree F. river). The jacket performed flawlessly and gets a major thumbs up." 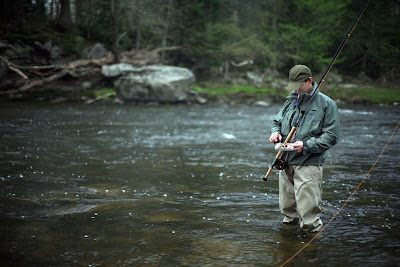 Photos courtesy of Dylan Tomine and Rene Braun
Posted by El Pescador at 10:43 AM 20 comments:

The mission of World Trout is to identify individuals and groups that protect native fish, tell their story and support their conservation efforts. Since its inception in January, 2005 (through March 31, 2007), anglers purchased 41,612 World Trout t-shirts and raised $208,060. World Trout supporters have also been seeking out grassroots groups to donate funds and 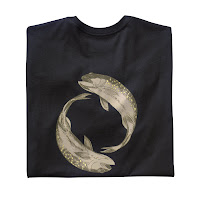 volunteer their time. Patagonia plans to continue the World Trout efforts which help provide funding for groups who protect fish and enhance natural habitats. Help support grassroots groups in your local areas (fresh and saltwater) by volunteering your time and/or providing financial support. In the case of World Trout, simply buying a limited edition, organic cotton t-shirt can help protect species at home and around the world. Click on the bold text to learn more. Visit a Patagonia Dealer or Patagonia Retail Store near you.

Click here to watch a short video on artist and World Trout co-founder James Prosek.
Posted by El Pescador at 9:14 AM 4 comments:

Arlington, VA — February 4, 2008 — New Nature Conservancy-funded research shows that across the U.S. and in other developed nations, people are spending far less time outdoors than ever before. The study will be published this week in the Proceedings of the National Academy of Sciences.

Researchers say this study — the most comprehensive look yet at nature recreation — is a "grim confirmation" of a long-held theory that people, especially children, are spending less time in the great outdoors.

The research builds on earlier studies that showed visits to American national parks were declining, and it illustrates that the problem isn’t limited to parks — and isn’t just found in the U.S. "As a scientist and a conservationist, I find these results almost terrifying," said Oliver Pergams, assistant professor of biological sciences at the University of Illinois at Chicago and lead author of the study. "We are seeing a fundamental shift away from people's interest in nature, not just in the US but in other countries, too. The consequences of this could be deep and far-ranging for health, for human well-being, and for the future of the planet."

Posted by El Pescador at 8:07 PM No comments: