As a student of art and art history I was especially impressed by certain painters from the Italian renaissance era. One was Caravaggio for his ability to capture qualities of light with paint, another was Titian because of his expressive use of color. Here's an artist that seems to have the DNA of both of those guys rolled into one. His name is Mike Savlen. Check out Mike's work at savlenstudios.com. I think you'll enjoy his creations.
Posted by El Pescador at 10:02 AM 2 comments: 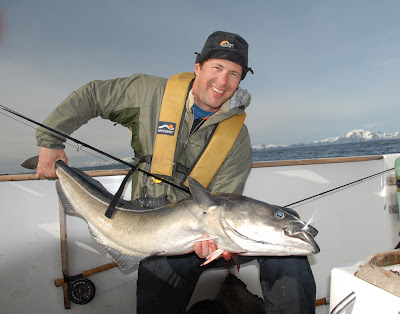 ab which gave us confidence in our fly selection. I thought I would only be able to get to maybe 60 feet, so this was quite exciting. We were effective fishing from 10 meters to 40 and ended up getting cod up to 14lbs mostly on a crab flies I tied, but on the last day I was able to hook a 13 kilo (30lbs) Sei 'Coalfish' on a white clouser. It was the European record caught on the fly. Previous record was about 7 lbs. I hooked it at about 20 meters."
Congratulations from Way Upstream Jeff. Med vennlig hilsen.
Story and image contributions by Jeff Leopold
Posted by El Pescador at 12:18 PM 7 comments:

Come on in the water's fine 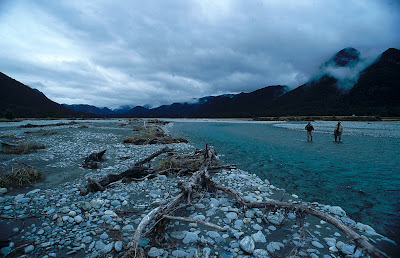 I’m beginning some new product development and want to include you in the process. I’m looking for your thoughts, ideas and comments about waders. This is a conversation that I’d like you to consider open and ongoing. If you know someone who has an opinion on this topic please encourage him or her to join the discussion too. Comments can be broad or specific (zone focused). Tell me what you like, hate and wish for. Tell me a story if that helps convey needs more clearly. Come on in the water’s fine. Photo by Jeff Leopold
Posted by El Pescador at 11:39 PM 143 comments: 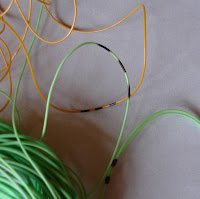 Your guide has just seen a sign. "Fish at 11 o'clock...moving west...50 feet...cast!" If you have your wits about you, you'll find the clock and compass positions, estimate the distance and throw. If you don't you can be frozen, wondering which way is west and how far is 50 feet. Here's an easy step that will help you learn to gauge distance on any type of water. Mark your fly line with a permanent marker at the 30 and 60 foot measurements. These marks will be visible to you every time you fish. You will become very familiar with that first mark because so much fishing happens within the 30 foot range. These marks not only help you calculate line distance out but also distance in. When you are gaining line on a fish you'll be glad to see these measurements coming back onto the reel. Go ahead, make your mark.
Posted by El Pescador at 6:53 PM 4 comments: 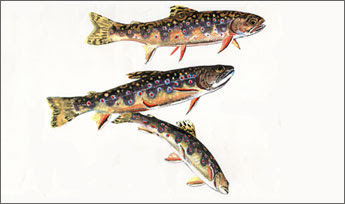 This angler, artist, writer, naturalist and musician is a talent worth noting. He and Yvon Chouinard founded World Trout, an on-going conservation effort to preserve native trout species worldwide. Tom Browkaw said this about Prosek and his recent book (The Day My Mother Left) "One of America’s more gifted young writers–and this deeply felt story reaffirms his great promise". If you happen to be on the east coast this September you can see an exhibition of his work at the Aldrich Contemporary Art Museum in Ridgefield, CT. - aldrichart.org. Check out his site for details on all this and more - troutsite.com
Posted by El Pescador at 7:54 PM No comments:

Stripping baskets come in a variety of shapes and sizes. They are made of a myriad of materials. Users debate points like the need for drainage, belt type, cone configuration and collapsible qualities. Debates aside, the humble origins of this tool come from the dish pan. Saltwater anglers have really come to rely on these baskets. Freshwater anglers are using them too for certain waters. What are your experiences, ideas and comments about stripping baskets?
Photo by Dave Skok, Copyright 2007
Posted by El Pescador at 8:54 AM 14 comments: 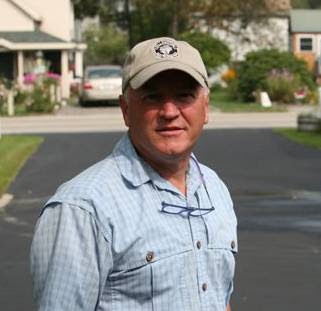 If anyone has a story about or message for Bill that they'd like to post, please share it under comments. All the very best wished Bill.
Posted by El Pescador at 1:21 PM 17 comments: