I received some product feedback that I wanted to share with the Way Upstream community. The following letter and photos are from guide and casting instructor Joel Hays:
Hi Steve -

My name is Joel Hays and I'm a guide in North Texas. I specialize in fly fishing freshwater flats for carp at Lake Ray Roberts north of Dallas/Ft. Worth. An amazing fishery, 4-8 lb. fish that love flies, TAILING in inches of clear water - an absolute blast! Anyway, I received your contact info from the guys at the Tailwaters fly shop in Dallas. I took them fishing last weekend and they said "Dude, you've got to send Patagonia a picture of your Marlwalkers!" Well, attached is a photo of my beloved boots. This is my third pair of Marlwalkers and nothing stands up better to the abuse I give footwear.

Hard packed coral flats have nothing against the bottom of this lake in terms of shoe torture - broken glass, old house foundations, barbed wire, abandoned well equipment, etc. The discoloration is from iron oxide leached out of the sandstone that surrounds half the lake. Thanks for a great product - these boots have lasted three years in a VERY harsh environment. Contact me when you're in Dallas and I'll show you to some amazing fishing!
Joel Hays - www.dfwflyfishing.com 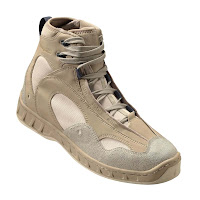 Note that Joel's Marlwalkers are the originals which were introduced in 1999. The Marlwalker® of today has evolved some but is still the same superb flats/surf fishing shoe. It's been combat tested on the razor-sharp coral pancakes of Christmas Island, this third version of our classic flats shoe is better than ever. Lighter, more flexible and faster drying, the latest Marlwalker retains the stiff midsole flex pattern and killer durability that’s made it the favorite of flats guides everywhere. Boot-style protection and support reduce fatigue and maximize stability.

Photos courtesy of Joel Hays
Posted by El Pescador at 7:59 AM

I hope that the neoprene cuffs around the pull-loop-thingy are tougher in the 3rd generation than they were in the 2nd gen.
Other than that (mostly cosmetic) glitch my gen 2 marlwalkers have been great kicks.
WT

The "pull-loop-thingy" is solidly sewn to both the neoprene and shoe. The shoe throat has also been opened up so it's easy to get in and out. Thanks for the comment WT. Good to know your MW's have been great kicks.