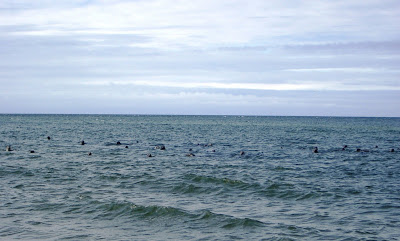 Here's a trip report from Henry Barber and Ed Bielijec. Both these guys are special people that push the boundaries and I thought it was worth sharing with the Way Upstream community. 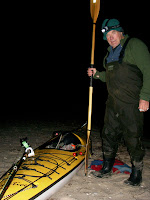 Henry wrote "Ed and I paddled out four miles to a remote point in Cape Cod bay. We got out for the outgoing tide and we fished high slack outgoing all the way to low. We were able to find the flats off the point and figure out holes and troughs near shore to target when we came back. The seals were everywhere. I landed one blue (bluefish) and 29 stripers in our first session. Hence the seals were pissed because we were stealing their lunch. Ed didn’t fare as well but he would fix that the next night when we paddled out for a midnight session. We left in early evening for the same four mile paddle because walking the sand would have been exhausting. The fish were surfacing even in the shallows. When we got out I immediately had a beer 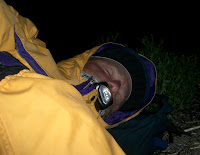 and went to sleep while Ed proceeded to roam another 1/2 mile off shore on the flats, in the dark, on an incoming tide! He maintained that he could bounce off the bottom pretty well and make it to higher ground if need be. Ed caught eight fish on his first foray but no hogs as we had hoped. He came back to sleep until we got the high slack again around 1am. We awoke as two coyotes passed by growling at us for trespassing on their point. We headed out at the high slack tide and I landed a fish on the first cast in a

hole/trough that I had marked on the low tide the day before. I had a slow night though and only landed two more fish while Ed slayed them with his spey rod all night long. I guess when you find those honey holes you gotta work 'em."