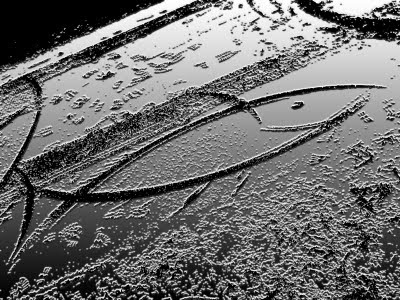 We argue about the philosophical underpinnings
of catching largemouth bass.

He says you have to know when to change patterns,
by which he means go to a new strategy.

Some fishermen stay with the same tactics too long
before finally realizing they’re not going to be productive.

The skillful angler knows very quickly when
to change to something else. He has vast experience.
He knows barometric pressure, wind conditions,
water temperature, thermocline, time of year,
hour of the day, position of the sun, effects of cloud cover,
structure at the bottom of the lake.

I think he has something there
until I recognize the great mystery
every time I cast a line into the unknown,
the sense of shock and surprise each time
a fish holds on to the hook, leaps out of the water,
suspended for a millisecond,
in a world it can’t possibly understand.

Thanks for the feedback DFW. The image effect is called "plaster" and is part of the Adobe Illustrator filter menu. The fish "drawing" was done with the heel of my boot covered foot and the canvas was my frost covered driveway.