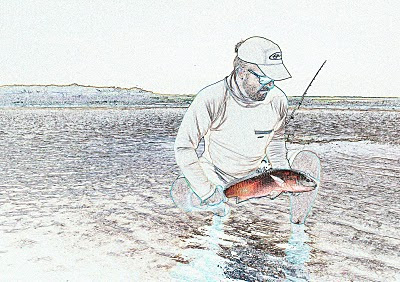 I've experienced some world class fly fishing for Louisiana redfish with Capt. Bryan Carter and Mike Thompson so when they told me about a particular piece of legislation up for review I decided to share it with the Way Upstream community. The following is a press release from CCA Executive Director/CEO David Cresson that explains their viewpoint:

Current Louisiana law grants “gamefish” status to over 10 different species of freshwater fish. However, only one saltwater species enjoys that same status: red drum. In the 1980s, commercial fishermen were decimating redfish stocks trying to meet the insatiable national demand for blackened redfish, a dish made famous by Chef Paul Prudhomme. At that critical time, CCA Louisiana stepped in to demand protection for this important recreational species. CCA was the driving force behind successful legislation that designated red drum as a gamefish in Louisiana waters.

Gamefish status provides a species with many important protections. First, it prevents the commercial sale of that particular wild species taken from local waters. Although we see redfish on restaurant menus across our state, these fish are either farm raised or wild fish brought into Louisiana from Mexico or Mississippi (where redfish do not enjoy gamefish protection).

Another important protection afforded a gamefish is the allowed “method of take.” It is illegal to harvest gamefish with nets, spear guns, or bow and arrow. Black bass, striped bass, white perch, bream and others are all protected from this method of harvest. But redfish are not! It is currently legal to harvest a redfish with a bow and arrow or spear gun. Louisiana is the only state along the Gulf that allows a gamefish to be harvested with an arrow or spear.

Sen. Dan Claitor, R-Baton Rouge, has filed a bill in the Legislature to fix this glitch in our gamefish laws. His bill amends RS 56:320 so that red drum is provided the same protection extended to other species designated as “gamefish.”

CCA Louisiana is not against bow fishing. Amending the current law will still allow bow fishermen to harvest numerous saltwater species in Louisiana’s coastal marshes…..black drum, flounder, and sheepshead…..among others.

THE REDFISH IS A GAMEFISH IN LOUISIANA! LET’S HELP CHANGE THE LAW TO TREAT THEM THAT WAY!

If you are an angler from any state this is a just cause. If you are a Louisiana voter but not an angler this is a cause that you may be unaware of. Email or write your elected official on this time sensitive matter. If you are from out of state write an "amicus curiae" letter in support of changing this law. This has been an issue that I have heard conservationists in Louisiana talking about for as long as I have been fishing down there.