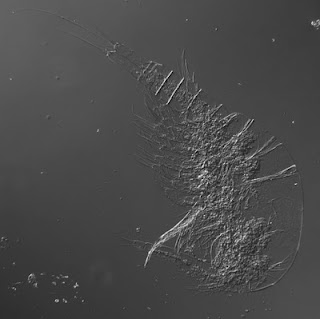 These photos were taken by fisheries biologist Andrew Muir.  He used a darkfield technique and his Nikon with scope attached to capture some "tiny critters" living in the Great Lakes called Copepods. Copepods are a group of very small crustaceans found in the worlds oceans and nearly every freshwater habitat. They are a major food source for fish, crustaceans, seabirds and whales. Some of these invertebrates drift in currents (planktonic), some live on the bottom (benthic) and others live in wet terrestrial places like swamps, stream beds and even under leaf fall in forests. Scientists speculate that planktonic copepods form the largest animal biomass on earth. Copepods even play a significant role in helping to manage the global ocean carbon sink and are being hired to control mosquito born illnesses. It's no understatement to say that all life depends on these little bugs which most of us never see. Check out The World of Copepods for more on this miniature tribe of movers and shakers. 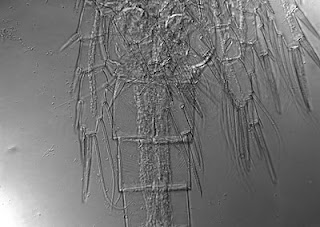 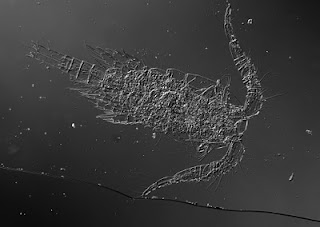 Photos by Andrew Muir
Posted by El Pescador at 8:16 AM