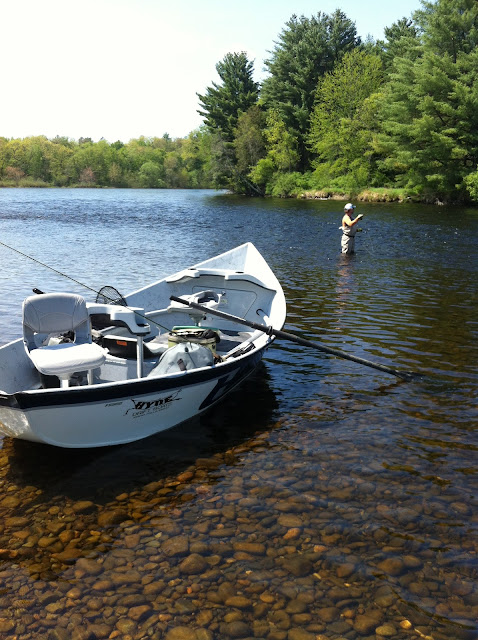 I met Sean McCormack somewhat by chance seven years ago at the Marlborough, MA fishing show where he invited me to join him for a float down the Kennebec River; water he knows like the backs of his hands. This trip has become a fortunate tradition for me and it has taken on a life of it's own. Each year we drift along in a continuum of conversation, experience and gear testing. This year I brought my friend Jeff Florman and we floated the Solon section of the river. Sean has a particular interest in dry fly presentations but we spent most of our time throwing streamers at the bank, imparting action to them in hopes of enticing consistent activity from fish too uninspired to grab bugs off the surface because hatches were either too Spartan or inconsistent. Conditions were excellent (flow levels and weather) for this earlier-than-usual drift. 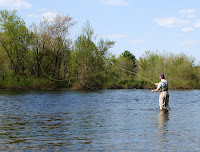 I tossed a weighted maribou sculpin pattern that was akin to what I would typically throw while holding an 8wt. in my striper skin. I felt right at home lobbing casts and imparting action with a 5wt. in the freshwater. Jeff winged a Gartside maribou streamer with a bullet head and even hurled a dropper streamer in certain deep sections. To our satisfaction, many presentations were met with aggressive acceptance. The catch list included browns, brookies, salmon, river tarpon (chubs) and a smallmouth. The rainbow eluded us.

Sean prepared a shore lunch around midpoint that would rival fine restaurant fare. The menu consisted of mixed olives for an appetizer followed by pan seared chicken breast with mushrooms, onions and sauteed green beans with slivered almonds.  Fresh pineapple and papaya completed the regal dinning experience. We sat briefly before stowing the kitchen and continued our drift down the Kennebec.

At this stage everyone was aware that time was now limited. Things seemed to matter just a bit more than before lunch. Small talk was sparse and silence filled the chat voids. Each cast, presentation and sales pitch held heightened significance. A missed strike seemed to have more impact than before and each fish caught felt more revered.

At the last bend in the river before the take out we slowed and scanned the surface for risers. They were scant but there were sippers to cast to. Streamers were removed.  Tiny dries were presented. I flicked my fly into a feeding lane that so far had been met with refusal.  Light was almost gone when the take happened. I set the hook and felt the familiar spontaneous head shaking. I uttered "little one" because there was no significant feeling of mass on the line's end. A second later the fish broke the calm surface revealing 16 inches of landlock salmon frenzy. A final surprise in a day of buoyant surprises. We all smiled inwardly as the fish was released into the dark water. Sean rowed to the take out where we broke down rods, stowed wading gear, closed boxes and covered the boat to be trailered away until next time. 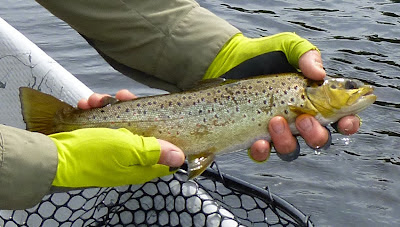 Photos by Jeff Florman and Steve Stracqualursi
Posted by El Pescador at 11:17 AM

beautiful and unique. thanks for the comment angler gang.