Jim McCarthy works for an Oregon river conservation organization named Waterwatch and he wanted to share one Oregon "success story" about the Rogue River's salmon and steelhead with the Way Upstream community. Here's what Jim wrote in an email to El Pescador: 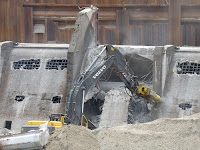 "Waterwatch, along with several allies, has led a campaign for over 20 years to help protect and restore the Rogue, focusing in particular on four fish-killing dams that made the most sense for removal: Gold Hill Dam, Elk Creek Dam, Savage Rapids Dam, and Gold Ray Dam. The fight to remove these dams has been quite long and sometimes bitter, involving litigation as well as battles in the state legislature, US Congress, and the media. But in recent years all the work has begun to pay off. An unprecedented number of significant dam removals has occurred on the Rogue over the last two years. In fact, I know of no other river basin in the US experiencing a comparable number of dam removals in so short a time. Last year, Gold Hill Dam was removed and Elk Creek Dam was notched. This year, Savage Rapids Dam is undergoing removal, representing one of the largest dam removals ever in the US. With some luck and a little help from a still-hoped-for grant under the American Recovery and Reinvestment Act (aka the federal stimulus), Gold Ray may come out within the next 18 months." 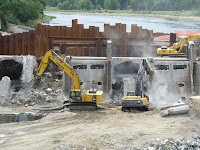 "Perhaps best of all, there are no real losers in the story of these Rogue dam removals. These dams are either defunct but too expensive for local governments to remove unassisted (Gold Ray), were determined not to be worth the cost of completion by the federal agency in charge of dam-building (Elk Creek), or outdated structures readily replaced by modern, fish-friendly pumps (Gold Hill and Savage Rapids). Though I've mentioned that the Rogue debate has been long and at times bitter, in the end it essentially has been a process of convincing local communities that some of the old ways of using our just rivers aren't working anymore – but there are better, more river-friendly options now. We can switch to the new ways and still enjoy the same benefits we had with the old ways, but leave a lot of the environmental problems behind. On a world famous gem of a watershed like the Rogue, you can really see the upside of taking care of our rivers. For example, government scientists have estimated that Savage Rapids removal alone will increase Rogue salmon and steelhead runs by 22%. In good years, that could translate into over 100,000 more fish, bringing enduring positive impacts for the region's ecology and economy."

"There may be some lessons to learn from the Rogue that can be applied to rivers like the Sacramento, Klamath, Columbia and other smaller watersheds around the West. Just ten years ago, the Rogue debate was just as polarized as things are now on the Sacramento or the Columbia. Hopefully attitudes there are trending in a more fish-friendly direction. The situation on the Rogue certainly shows that we can protect fish and still satisfy other competing interests on our rivers."

Contribution by Jim McCarthy Photos by Bob Hunter
Posted by El Pescador at 2:22 AM

thanks for the mention of the Rogue River restoration activities on your blog. Much appreciated. Wanted to share some more great news for Rogue River salmon, steelhead, fishermen, and boaters - yet another unnecessary, fish-killing dam on the Rogue is coming down. Federal officials announced today that the federal economic stimulus package will be providing a little salmon stimulus in the form of $5 million for Gold Ray Dam removal on the Rogue. If all goes as planned, Gold Ray will be out by the end of 2010. Check it out:
Oregonlive.com:Stimulus money will go towards Rogue River dam removal

Glad to help Jim. Thanks for the link. Keep us all informed here at Way Upstream of further developments on the Rogue.