I saw a new Jerry Darkes tube fly design that he's been testing and I asked him if he would pass on the fly tying instructions to the Way Upstream community. Jerry has been an occasional contributor so he was quick to oblige with detailed step-by-step photos and a list of materials needed for the Arctic Fox Wiggler. 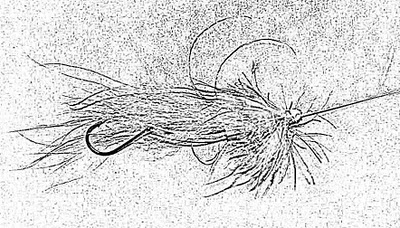 Prepare the Ballhead tube by inserting the plastic liner tube and melting both ends to hold it in place. Now slide on the junction tube. Slip the tube onto the pin or mandrel to hold it in place so it will not rotate. Note that the Eumer Adapter is being used in this example (photo at far right). Start by wrapping the thread on the junction tube where it extends over the body. 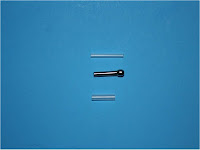 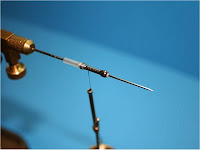 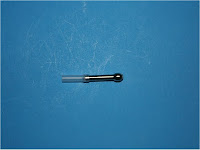 Tie down a section of Arctic fox tail fur so that it extends several inches past the end of the junction tube. Trim any excess fur sticking forward. Take 3-4 strands of flash twice as long as the tail and tie down in the middle on top of the tail. Fold it back and tie it down to lock the flash in position. Krinkle Mirror Flash from Cascade Crest is ideal due of it's attractive look in the water. 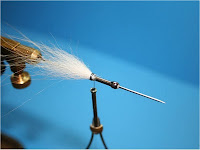 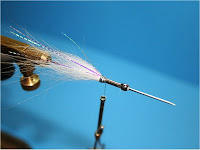 Tie in a short length of Estaz and wind forward leaving some room behind the ball, then tie off and trim. Tie in a schlappen hackle by the butt end and wrap forward 4 times, making sure each wrap is in front of the previous one. Secure and trim when complete. 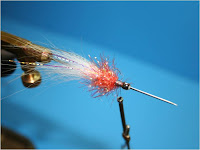 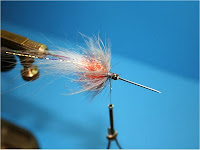 Tie in a short length of Palmer chenille and make 4 wraps forward. Make sure that each wrap is in front of the other and that the material does not twist. Tie off, trim, make a neat thread wrap, and whip finish the thread. 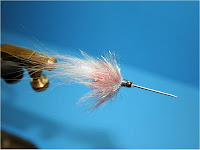 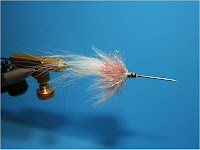 This fly really comes to life in the water. The Ballhead tube has a natural wiggle to it when stripped or swung in current. The Arctic fox tail breathes and the schlappen fibers pulsate from being held up by the Estaz. Jerry's original version uses a chartreuse tail, red Estaz body, red schlappen, and pearl Palmer chenille but a variety of color options could produce. Note that it's good to keep this fly moving fast when you strip it. 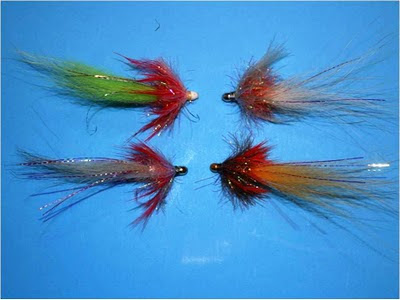 Run the tippet through the tube and through the eye of the hook (Daiichi 1640 #2 is shown). Tie an overhand loop. The size of the loop determines how far back the hook will ride. Pull the leader and seat the loop knot inside the liner tube. Depending on the tippet size used, you may need a double knot to seat it firmly inside the liner. Tippet lighter than 10 lb. test is not suggested. 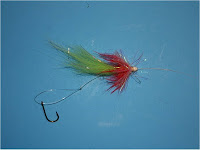 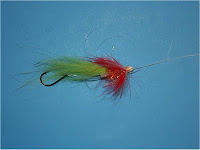 Here’s a nice trout that hit the Arctic Fox Wiggler during test sessions. R & D on this pattern will continue in a wide range of colors for a variety of species. Visit Jerry's blog - ACS - the FISHDOG for more fly patterns and fly fishing information. 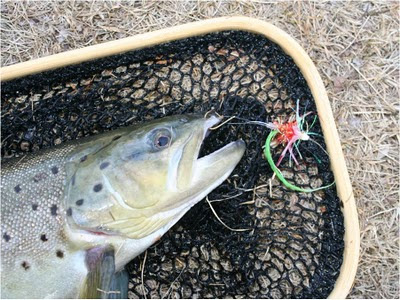