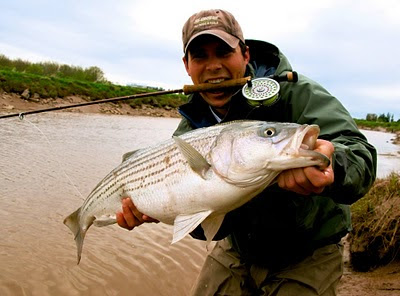 The Bay of Fundy lies in a rift valley called the Fundy Basin which is located along the Atlantic Canadian coast tucked in between New Brunswick and Nova Scotia. The Inner Bay of Fundy is most famous for the almost overnight extinction of Atlantic salmon. Some of Atlantic Canada’s most prolific salmon runs used to visit the IBOF rivers, now they are virtually all extinct with nothing but a remnant population. Runs in excess of 40,000 salmon dwindled to a couple hundred in a few short years during the late 1980’s. The exact cause is unknown – but the likely candidates are an over-abundance of aquaculture, dams and development. The Inner Bay became known as the black-hole, with The Canadian Department of Fisheries and Oceans being under-funded and under-staffed to do their job properly and assess the real cause of the problem. There is an IBOF Recovery Strategy in place now, but it’s difficult to say what its effect will be. Meanwhile, local anglers have taken up interest in another species - Striped Bass. Way Upstream community member Mike Bardsley sent me some images and information about chasing "linesiders" in this historic Atlantic salmon region. Here's what Mike shared about stripers:

I’ve only been chasing the spring stripers for the last two seasons – and as I’m sure you know, it’s a perpetual learning process. The rivers that I typically fish are the Shubenacadie River and the Stewiacke River. They are deep in the Inner Bay of Fundy, both stemming from the same inlet about 45 minutes outside of Halifax. There are many other options though, between Nova Scotia and New Brunswick. The St. John River in New Brunswick is famous for big stripers, and in Nova Scotia there are other options like the Gaspereau River, the Annapolis and others. Basically, any big watersheds that stem from the Inner Bay of Fundy (IBOF) generally offer the chance to catch stripers. Interestingly, though I’ve never tried the fishing up there, Cape Breton also gives up lots of opportunity for stripers, with the Nova Scotia record being broken twice last year! The Bras D’Or lakes in the Cape Breton are very large saltwater lakes and good catches of bass come from that area. You can see the picture of the record fish, plus get a bit more info here: Canada Striped Bass Fishing 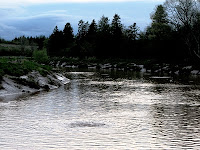 The striper run varies year to year, and size classes of the fish are cyclical, but generally the run comes in mid-May and will stay in some rivers right through October, though they are concentrated in schools and easiest to catch from mid-May to mid-June. They come in the rivers mainly to feed – their favorite eats are assumed to be eels and baitfish. In some rivers, the fish come in to spawn which can be an amazing site. Picture an 8’ x 8’ area of water on the surface that is boiling and frothing with big stripers in their mating ritual. For the most part, you see a lot people with heavy spinning gear fishing for the stripers with an assortment of soft baits, rapalas, jigs, etc. Live bait has been restricted over the last couple of years, so you don’t see quite as many “bait & wait anglers” – though they do still exist. There is a small but growing contingent of fly fishers who are chasing this anadramous species – you have to be willing to hunt the schools of bass, often walking several kilometers looking for signs of schools of fish. Fishing from boats is a good option as well, but good boat launches are hard to come by and the boat would need to draw a minimal amount of water (think small aluminum, jon boat or a skiff).

The runs of stripers seem to be in pretty good shape right now. The main concern though is the abundance of the older age class fish. It is becoming more and more of a concern that the majority of fish being seen and caught are older bigger fish. Which seems pretty good, but considering the only fish that are allowed to be kept are those over 26.8 inches. Fortunately though, the bag limit in most places is now one fish, with many places being catch & release only. Also, the elimination of live bait should help prevent some fish from being mortally wounded. I’ve been out half a dozen times this year and run the full gamut of conditions. From spotty fishing with hundreds if not thousands of bass spawning all the way up and down the river, to crazy awesome fishing with big fish being hooked every couple of minutes – triple and double headers were common, to nights like last night where five of us, all good fly fishers, hunted up and down the river for the fish and only managed to land one. 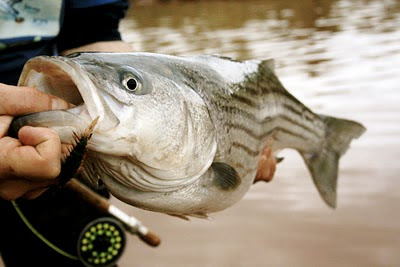 Photos and contribution courtesy of Mike Bardsley
Posted by El Pescador at 8:49 AM

Thanks for the report on a Canadian fishery I know very little about - definitely a learning process.

The Striper fishery is in fact, in very poor shape, due largely to over fishing and pollution in the chesapeake and hudson river systems (where the majority of striped bass in the north atlantic call home). As you briefly noted, the concern is the absence of younger fish, we are currently fishing the 2003 class of fish, and the subsequent classes are down by upwards of 60% year to year. Please take the time to register w/ www.stripersforever.org, they offer tons of valuable info and ways to get involved.

Thanks for the sober comment Michael. Brad Burns of Stripers Forever had this to say yesterday in an email exchange when I asked him how fishing has been up his way, "Steve - the only stripers up here in any numbers at all are the approx. 30” fish from what is left of the large 2003 year class. These fish are supplying most of the stripers everywhere in NE except for the remaining really large, old fish. There are very few small fish coming along, and the situation is not good at all."