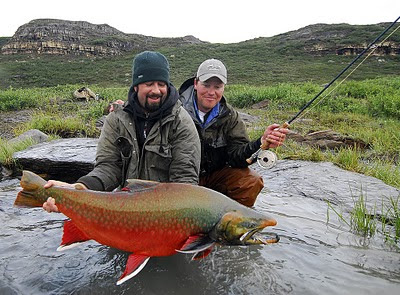 Photo courtesy of Fish as art
Posted by El Pescador at 6:10 AM

Spectacular! Well done, and thanks for sharing.

I think my life would be complete if I were you. Nice fish man!

Well, I need posting lessons it seems. Anyway, that is one amazing char you have there. I hope you don't mind, I've put up a link on my own blog for the guys I fish with down here in the Southern Blue Ridge. We have a strain of native Southern App. Brook Trout you might be interested in catching. Of course, it would take about 400 of them to equal the size of this one, incredible fish!
Good work...and nice photograph, too!

That fish is scary beautiful. Way to go.

Holy whopper char batman! Good thing I am in the process of becoming a fisheries biologist. It looks like tremendous things await!