On September 14th David Smart (photo below) caught a large Puget Sound cutthroat on a popper that was puking up a big pile worm around ten inches long. He had seen a number of these large marine worms swimming freely near the surface with sea-run cutthroats attacking them. He knew Dylan Tomine had developed the String Thing for steelhead. This fly has a long profile, skinny body and a trailing hook. This tying method fit the bill so Dylan quickly turned out the first String Worm fly for David. 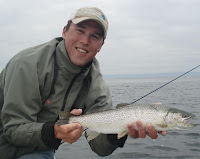 After a few on-the-water design/color experiments and the process of figuring out how to effectively swim this fly through the water, David started to catch some big fish.

Large cutthroat are rare and it is very difficult to regularly catch fish over 18 inches but the String Worm fly does just that; it catches big fish and lots of them. Since development of this fly, David caught more big cutthroats in two weeks than in the last 10 years combined, including a mammoth 24-incher and a couple equally impressive 22-inch fish.

In addition to catching sea-run cutthroat trout, it has also taken blackmouth (immature chinook) and silvers (coho salmon), proving surprisingly effective on some staging coho in a local estuary. The best way to fish this fly is very slowly with slow smooth strips so that it slithers through the water. The fish see this as a large, very easy meal to grab as it swims by, and while the takes may be subtle as a fish engulfs the fly, the results are amazing.

Contribution by David Smart and Dylan Tomine
Posted by El Pescador at 5:17 PM

Had a chance to fish with Dylan, David and JT today after a tour over at Sage. I even managed to tag a trophy sized cuttie on a pink version of the String Thing. It was a blustery day on the Sound, but the sun broke out late in the afternoon and it was an all around great day!

David Smart, our local sea-run cutt guru, says into the phone over the sound of a screaming drag, "This is unbelievable, I can't believe how the big cutties are coming after the worm...Can you hear him jumping?" Yeah, that's great David, I reply from my desk where I am pounding away at the keyboard. It would be great, too, if one, I wasn't at my desk, and two, if this wasn't the tenth "screaming drag" call I'd received from him this morning...

The String Worm has radically changed our success rate here in mid-Puget Sound. For whatever reason, the really big cutts plus feeder kings and silvers just flat-out love this fly. As a lifelong steelhead bum/river guy, this has really re-envigorated my interest in our local saltwater fisheries.

On another subject, i've been testing the new Guidewater Jacket (out in 08) and am pleased to report it kicks ass. As the attached picture (click on my name in the blog post) shows, we've been on the water in some brutal conditions and have experienced an amazing level of comfort. The longer length is perfect for boat fishing, where it covers the side cut-outs on my bibs perfectly, but it's still short enough for serious wading.

The new pocket system is streamlined and doesn't snag shooting fly line, and the fleece-lined handwarmers are really a luxury. You almost feel guilty putting your cold, wet hands into the toasty warmth of these pockets. And the tuck away hood works really easily and avoids the snapping and popping of a permanent hood when you're in wind or cruising to the next spot.

Anyway, that's it for now. Thanks for checking in on what we're doing here around the Sound. I think the String Worm has a lot of potential in different colors and sizes for the east coast striper and tarpon worm hatches--the fish out here just can't help themselves from eating it.

Very cool post. The 'ol light bulb above the head only turns on like that once or twice a lifetime.
Awesome pics too, great looking fish.

Just a quick update--I am happy to report that David is, at this moment out on the Sound fishing the String Worm (proving once again that work is for people who don't know how to fish...), and has been providing a continuous stream of screaming-drag phone calls and "I just landed another 22-incher" calls. I am even happier to report that in close time proximity to just such a call, he fell down the dock ramp and nearly broke his arm. Ah, sweet justice...

And FlyTimes--you ain't kidding about the light bulb. This String Worm thing is one of the few times that not only had the lightbulb gone on, but it's actually continued to light the room. It's really David's discovery, but I'm happy to have been able to provide the fly design and reap some of the rewards. Too much fun.

nearly passing out and falling into the water is only funny to some people. That hurt like hell!
I am quite happy to report that yesterday i landed the biggest cutt i have ever caught on a string-worm. This slab ate an olive string-worm variation i tied. And i am even more happy to report that i was able to gloat while Dylan was busy as his desk working!

And the list grows of species hooked on the worm... unfortunately, this one was not one to be landed.
I was fishing a shallow tidal bay this evening when i was up tight against the bank after seeing a push of water in the area. A few strips later i feel the weight of a fish and come tight on the line. Except it was not a fish, but rather a baby seal. I quickly broke him off before he could start to peel line.
An eventful evening and a first for me. On the cutthroat side of things, we landed 5 or 6 up to 17-18" and missed a few more. A beautiful night on the water.

Yeah, that's great, David. You had to say "baby" seal, too, right? All you forgot was a few other adjectives like "cute," "fuzzy" and "cuddly." Couldn't have been a fierce, nasty, salmon poaching, ugly, menacing old bull sea lion? What's next, headed to Canada for a little baby harp seal clubfest? Wait 'til PETA gets ahold of this one!

Seriously, I think this just shows that almost every predator in the Sound is into eating these big marine worms. We'll just have to try to keep your casts away from the mammals in the future.

Go easy on the mammals and the birds David. You'll need a hunting license if you keep it up.