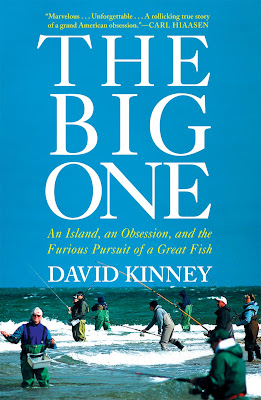 Pulitzer Prize winning journalist David Kinney has just released The Big One. He spent two months on Martha's Vineyard in 2007 documenting the island's long-running striper and bluefish (and albie and bonito) derby. Dave hung out with boaters, surf casters, fly fishermen and bait slingers. One of the books highlights involves the Tiger Woods of the derby, who catches a 57-pound striper that turns out to be filled with 10 lead weights. The guy swears he didn't cheat, and controversy ensues. DreamWorks has already bought the film rights to this story. I asked Dave to share his thoughts on the project and this is what he said: 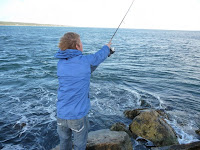 "I'm a longtime fisherman -- first freshwater bass, then trout on flies, then stripers and blues from the surf -- which is what got me thinking about fishing the striped bass and bluefish derby on Martha's Vineyard. I'm also a writer, and I love reading stories about subcultures obsessed with ... well, whatever: extreme beer, orchids, the Civil War, high school football, Scrabble. I put those two things together and ended up with the formula for my first book.

In 2007, I spent two months on the Vineyard fishing in and documenting the derby, probably the most celebrated striper fishing tournament anywhere. It's got sixty-odd years of rich history, and anybody can win the thing: a 12-year-old girl caught the big striper one year. I entered the derby myself and caught a few fish (my best striper weighed in at 17 pounds) but I was really after stories. It took some work getting islanders to let me follow them around while they fished. This is a cagey group under normal circumstances, and when you put them into a competition with island immortality and more than $250,000 in prizes at stake, they can get a little paranoid. Eventually I won their trust, and I went out at all hours with people who take the sport way, way more seriously than I ever have. During the tournament, people will skip out on work, stay up all night for weeks on end, risk drowning, cheat and (of course) lie.

I lucked into being there for one of the more interesting derbies. The best young striper fisherman on the island, Lev Wlodyka, got a 57-pound bass -- topping a 56-pounder caught earlier in the contest -- but when he brought it to the weigh station, the derby officials discovered it was filled with lead weights. Controversy ensued: heated debates broke out, the public weighed in, Lev wrote a spirited letter in his own defense. I won't spoil the book by telling you what happens, but the whole thing made for a fun story to tell.

It's definitely a different sort of fishing book. It focuses less on man-versus-fish, or the contemplative pleasures of going off into the wilderness and connecting with nature, and more on the communal aspect of fishing. Competition is always there in fishing -- guys want to catch the biggest fish of the day, or a better fish than their friends, or a fish they can brag about to their family. By telling the story of the derby, I tried to bring that to life. I hope people have as much fun reading it as I did bringing it to the page."

Photos by David Kinney Cover photo by Dave Skok
Posted by El Pescador at 2:22 AM