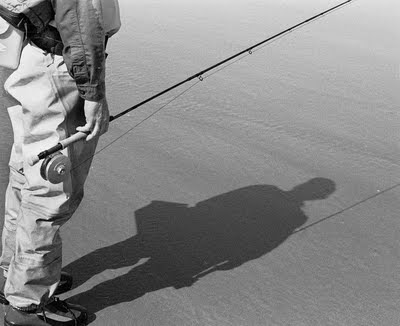 I wasn't able to attend FFR this year so I've been looking for reports on the tradeshow and saw one pop onto the radar last night. Drew Simmons of wicked outdoorsy posted highlights, news and commentary about the recent FFR show that I wanted to share with the Way Upstream community. The post is titled - FlyFishing Retailer to leave Denver? Check it out. Share your thoughts. I'll keep you posted on other reviews as they appear.

Photo by Rene Braun
Posted by El Pescador at 9:00 AM

Wish you were there Steve. You didn't miss too much. Lots of the same faces. Always good to connect with old friends and put faces to names of people you communicate with over the internet though. I think that's were i first met you face to face for the first time a couple years ago. I'm looking forward to the move to SLC. I hate that drive to the airport from Denver. The ski industry show moved from Vegas and is now going to be in Denver for the first time this winter. Wish they were moving to SLC too.

It sounds like the FFR move from Denver to SLC isn't a done deal yet Mikey. I think there are still a lot of the same issues to iron out (timing, space, participation, etc.) We'll see. I'll keep you posted if I hear any definite decision.

Our friends over at MoldyChum have been posting a host of Fish Schtick video shorts and podcasts from FFR. Visit http://www.moldychum.com/ to review.

Our friends at Moldy Chum and The Trout Underground are keeping an eye on 2010 FFR developments as well as sharing viewpoints.

Our friends at MidCurrent have posted the AFFTA and Nielson press releases for your review.

Here's the latest press release by AFFTA that I saw on SNEWS:

Louisville, CO. -- After evaluating every available option and in response to input received from fly fishing industry retailers, manufacturers, sales reps and media, the AFFTA board of directors unanimously voted Tuesday December 15, 2009 to endorse the formation of a new independent fly fishing trade show. The International Fly Tackle Dealer (IFTD) show will debut at the Colorado Convention Center in Denver, Colorado during the 3rd quarter of 2010.

AFFTA Chairman Alan Gnann stated, "Throughout our careful and deliberate evaluation it became abundantly clear that a general fishing tackle show (ICAST) or a general outdoor show (Outdoor Retailer) would not serve the best interests of the of the fly fishing trade. It was also very apparent that the new found interest in fly fishing by these organizations was not aligned with AFFTA's mission, making the decision very clear." Gnann continues, "The entire AFFTA board is incredibly energized and motivated to make this the best show the industry has ever seen. The support of key exhibitors and retailers for AFFTA to sponsor an independent fly fishing industry trade show has been nothing short of overwhelming. We look forward to hosting the most dynamic and exciting trade show in years; and importantly - the only show focused exclusively on the sport of fly fishing."

Concurrent with this announcement, AFFTA is also excited to announce the hiring of fly fishing industry veteran Randi Swisher to the new role of Vice President and Director of Marketing. Randi is a lifelong angler and brings to AFFTA over twenty years of fly fishing industry experience in sales, marketing and trade show production; most recently serving as Corporate Account Manager for the International Sportsmen's Exposition (ISE) where his responsibilities included exhibit sales, show management, and retailer / manufacturer partnerships for ISE's 5 regional consumer outdoor shows. Prior to this, Randi worked in marketing and sales roles for Lamiglas and Sage for 15 years, and for 5 years he owned a manufacturer's rep company serving the Rocky Mountain region while representing 8 premier fly fishing brands.. Randi will focus his efforts on the marketing, sales, and production of AFFTA's new trade show. Randi graduated from the University of MT majoring in Business Administration. Randi, resides in the greater Denver area with his wife and daughter.

Four possible show dates at the Colorado Convention Center have been identified with a decision on the final show date to be driven by an AFFTA Retailer Survey that will be launched today. The final show date will be announced on January 4, 2010.