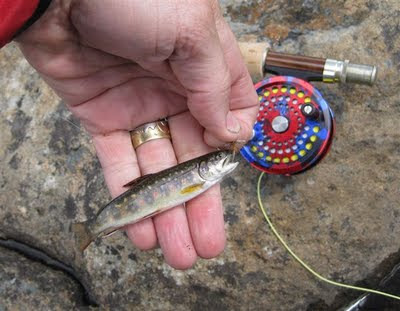 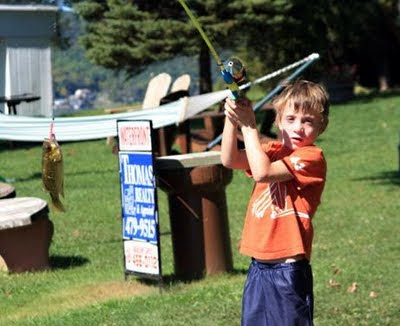 Photos by Dave Buchholz and Marie Thornton
Posted by El Pescador at 8:12 AM

Love that little fish. So cool. Aaron is learning a lot about fish.
He learned how to identify a rock bass, large mouthed bass, pike, bullhead, carp and striped bass so far.

If Aaron keeps the line in the water by the camp he may eventually be able to identify a tiger musky too!

True! He's so funny, we've been learning about killer whales, sea snakes and such. He told a teacher at the preschool he saw a killer whale in Maine while he was swimming.

I wish my imagination was still that fertile. For kicks, tell Aaron that I caught a killer whale on my fly rod and let it go.

That first fish looks like the type I catch.
Keep it up!

Thanks for the comment Phil. You keep it up too!

The little one is as valuable as the big one! It's a different feel.