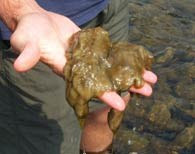 This is Didymo algae (Didymosphenia geminata), also appropriately known as "rock snot". It continues to spread a deadly path in trout habitat. This algae forms a thick layer on stream beds, in time choking out most aquatic insects and greatly reducing food supplies for trout. New Zealand has had a significant problem with Didymo for some time. Since the mid-Eighties, Didymo has become a growing nuisance in North America. It is present in rivers throughout the West, Arkansas, and Canada. This 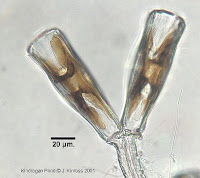 summer the algae was discovered for the first time in New England waters (Connecticut, White and Battenkill Rivers). The rapidly growing territory of this invasive single celled organism has led many scientists to believe humans play a significant role in it's spread by inadvertently transporting Didymosphenia geminata on fishing boots, waders and boats. Please check out the links below to learn more about Didymo and what you can do to help prevent the spread of this freshwater diatom.

Thanks for putting out the word on Didymo and the links describing the sanitation process. The word is getting out slowly and it is surprising how many anglers are still in the dark about the current infestation and the steps they should be taking to combat the spread of Didymo.

It isn’t unreasonable to think that we as recreational users (consumptive and nonconsumptive alike) are one of the primary vectors of the current infestations in the Battenkill, White, and Connecticut Rivers. It is therefore our responsibility to be the first line of defense against further spread of Didymo. By taking precautions above and beyond our own expectations of responsibility we can have a tremendously positive impact on the health of not only Vermont’s respective watersheds but also its wild and native fish populations around the state as well as the country by controlling the spread of Didymo. That means a level of sacrifice unknown to current and past generations of Vermont sportsmen and women. As recreational and commercial users of the resource it is our responsibility to protect, conserve, and preserve the natural resources for the sake of the resources itself. That means putting aside differences and biases to boost the resources interests above our own.