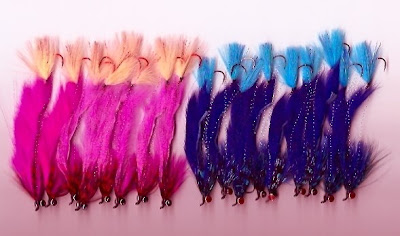 I got an email from Patagonia Fishing Ambassador Dylan Tomine who is gearing up for an adventurous Spring steelhead trip. The topic of the email was his fly pattern called the String Thing. I thought some of you may be interested due to the fact that the earlier post about Dylan's String Worm and fly photo has gotten a lot of views. Here are Dylan's words: 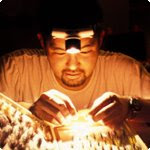 "Just twisting up a few String Things for a North Coast, BC trip in a few weeks—especially since noted fly moocher Tim Pask is involved. Blue is my all-around favorite and usual go-to fly, but based on the success gear guys are seeing with the much-vaunted “pink worm,” I caved in and made some of these for buddies on the Olympic Peninsula. Their results were stellar. So good, in fact, I’ve quickly gotten over my prejudice against pink steelhead flies and am now fishing them myself. So far so good. I’m stoked to be up there searching for spring steelhead on some of the rivers that drain into the Inside Passage. Will report back when I return."

How goes it? Just back from our North Coast, British Columbia spring steelhead expedition and thought I’d report in. We took a 42-foot converted gillnetter out of Prince Rupert and headed north with two small jet sleds in tow. The plan was to anchor up in the river mouths and take the sleds upstream to swing flies for big spring steelhead. But, as they say, “Man plans, Mother Nature laughs.”

We found 8-foot ice walls on the river banks (should be bare by this time of year), brutally low water and 34-degree river temps. To top it off, as the river dropped, it actually got dirtier—eventually reaching the chocolate milk stage and forcing us to bail on the whole enterprise. We did find a couple fish, but as the weather went down the tubes, and the boating became a scary matter of bouncing from rock to rock to stump to log jam to ice berg...well, it just stopped making sense.

But it was actually a fun trip and a great adventure. I got to spend time with good friends and environmental superheroes Bruce Hill and Gerald Amos of the Headwaters Initiative and learn about the threats posed to this pristine region by the Enbridge Pipeline. And any time I get to hang around outside exploring rivers and messing around with boats with my buddy, photographer Tim Pask is always a great experience. Toss in some world class crabbing and the resulting gluttony, and well, like I said—fun trip.

The unseasonably wintry conditions also made for perfect gear testing. While standing in near-frozen water and dodging icebergs, I found the Guidewater Waders’ Merino wool grid booties kept my feet exceptionally warm, dry and comfortable. This was especially surprising because upstream hikes and hauling the sled off rocks meant plenty of exertion and sweat happening between the long stretches of submerged standing and casting.

This was also my first “fleece free” expedition, where for weight and space limitations, I went with all “puff” gear for my main insulation. Micropuff Pants over Cap 3 on the lower half and Micropuff Jacket over Cap 3 and R1 Pullover on top kept me warm and comfortable in all kinds of miserable weather. It was tough to leave my trusty R4 at home, but the light, airy feeling of puff gear, not to mention how easy it is to layer made it the perfect choice. In fact, other than sleeping, I never took the above combo off for the whole trip. When we were on deck and it got really cold, I just threw a DAS Parka over everything else and floated in warmth. I frickin’ LOVE puff!

One other piece of equipment I have to call out for outstanding performance: The felted-bottom heavy-weight wool socks are absolutely unbeatable inside waders. Best socks ever.

So...busted trip? I guess as far as actually catching huge numbers of giant steelhead, yeah. But in the big picture, it was a killer experience and a ton of fun. And I’ve come to realize that’s the real reason we roll the dice on “iffy” gambles like this one—it ends up being about the people, the place, the food and what you see and learn. So in that context, great trip.

I thought I'd pile on as well. I now have some serious time on the Guidewater waders and have to agree completely with Dylan. I must be one the of the people with bad circulation, as my feet get cold when water temps drop below 40. I have enough days in these waders to know that the Neo/Wool makes a huge difference in both warth and comfort.

I have to also agree that the Puff products are amazing and I have found myself going more towards Puff then fleece this past year. It is amazingly light and WARM. I toss my Puff Hoody in my StormFront Pack and always have extra warmth if need be, but my 18 year old pullover puff still works great over some wool...

We also put some serous miles walking the river as soon as the boat was beached in shallow water (daily occurance), and I was able to really regulate my body temp this trip.

Not sure how, but I actually managed to gain a few pounds. Of course the combination of Gerald's food foraging abilities and Bruce's culinary abilities might have something to do with it.

Anybody looking for a slighted dented 17.5' Willie Boat??

Thanks for the adventure update and feedback guys. I look forward to hearing more from the trip when our paths cross. Onward.